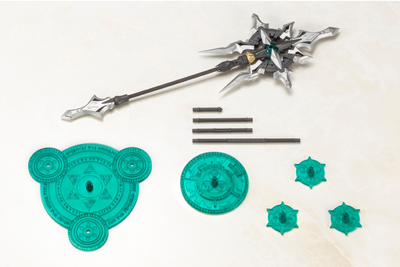 Similar to the previously released Magia Blade, this Heavy Weapon Unit is inspired by the magically summoned blades you often seen in fantasy and science fiction. The magical wand, Alnair Rod, can be assembled into various weapons such as a spear or sickle. The magic circle effect parts come in large, medium, and small sizes, and can be attached to the Alnair Rod via the 3mm joint. Get this kit to recreate scenes from your favorite anime, games, or manga! You can also attach them to other Kotobukiya kits to add as accent parts to other model kits and customize to your liking. By adding a Milight (lithium-ion battery with an LED attached) to the this Heavy Weapon Unit, you can make the core clear pieces light up.