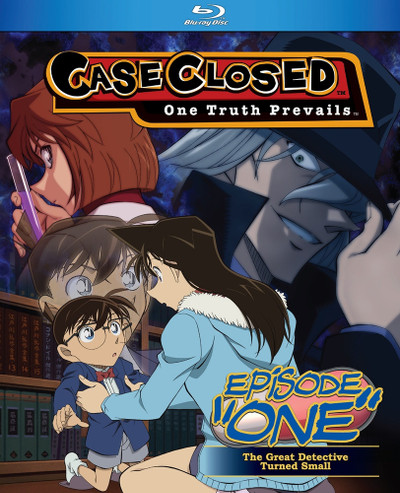 Detective Conan: Episode "One" The Great Detective Turned Small is an anime film directed by Yasuichiro Yamamoto and is a thrilling and inventive retelling of the original Detective Conan origin story. Created twenty years after the legendary young detective made his TV anime debut in 1996, this film serves as a re-introduction to Shinichi Kudo's crime-fighting exploits as Conan Edogawa, his distant and wistful romance with Ran Mouri, and his burgeoning friendship with Professor Agasa and the Junior Detective League. Hundreds of TV episodes and dozens of movies and specials featuring Detective Conan have been made, but don't fret -- you can pick the trial up right here!

It all started when Ran Mouri lost her smartphone. Shinichi Kudo, her would-be boyfriend, promises to replace it, but the high schooler is already making his name as a consulting detective for the police; when he abruptly leaves her karate tournament to skillfully solve a high-society murder case, Shinichi's going to have a take Ran on a special date to get back on her good side. A colorful amusement park beckons-- and so does a horrifying act of homicide!

In pursuing this new murder mystery, Shinichi stumbles across the shadowy Black Organization, a crime syndicate that attempts to silence the gifted sleuth the only way they can without attracting attention-- by force-feeding him a strange drug with unknown properties. Now, Shinichi finds himself younger--so much younger, in fact, that his police allies don't even recognize him! Armed with nothing but his wits and a brand new identity as Conan Edogawa, boy detective, Kudo takes off in pursuit of justice, answers, and someday, a return to his original age.

One Piece Episode Of Sabo Blu-Ray/DVD

One Piece - Episode Of East Blue: Luffy And His Friends? Great Adventure Blu-Ray/DVD